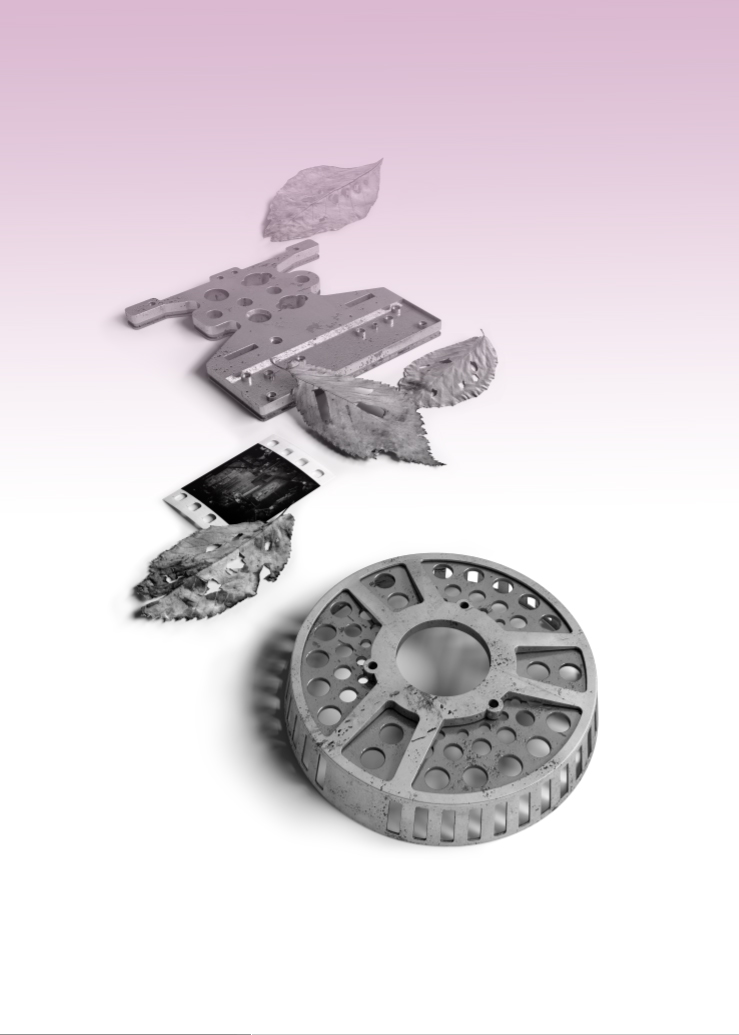 In her dense, atmospheric works, Alexandra Navratil interweaves current questions about image-based media with their industrial and technological histories. Photography and film – the still and the moving image – are relatively young when compared to other image-making media. Navratil takes us on a journey into history, and creates links with the present through subtle references and minimal alterations in the original material.

Rachel de Joode’s work immerses us in a world that at once seems familiar yet foreign: a photographic image of a certain object represents this object. She believes that photography frees the object from its material body. Techno- logical changes have a huge influence the way we perceive – screens now play a major role in viewing and receiving images, and Rachel de Joode’s work occupies this area between analogue materiality and digital reproduction.

Both artists form a link between the past and the present, and enthusiastically break free from traditional ideas of how photography can manifest itself today.

Alexandra Navratil (*1978) lives and works in Zürich and Amsterdam, and teaches at the Basel Art Institute. Her work has received many awards, including the Manor Art Prize Canton Zürich (2013). She is represented by the galleries Dan Gunn (Berlin) and BolteLang (Zürich).

Historical research into the origins of photography and film history forms the starting point of Alexandra Navratil’s (*1978, lives and works in in Zürich and Amsterdam) creative work. Through the animation and cinematic arrange- ment of found material, Navratil’s series recount industrial history and demonstrate not only how this footage is stored in archives, but also how history is inscribed in the material itself.

In 1909, AGFA AG established the Filmfabrik Wolfen. Besides photographic film, the factory, which later became famous under the name ORWO, produced cinema film, reprographic and radiographic film material, technical films and plates, and magnetic tapes. In the GDR-era, the plant was the biggest manufacturer of film material and enjoyed a monopoly on production. The inspiration for the AGFA trilogy, which is being exhibited for the first time as a com- plete series, stems from in and around the factory, the factory’s history and its relevance in terms of media history.

«Resurrections» (2014) focuses on the main component of film emulsion: gelatine. In order to capture and record fleeting images, silver and its salts became integral components of a process that not only enabled image production – possible since the Middle Ages with the camera obscura – but also its fixing onto a physical medium. Photography first became widely successful with the introduction of gelatine as a binding agent for the light-sensitive silver salts. Due to its numerous advantages, especially the consistent quality and storability of the plates before exposure and development, the gelatine process largely supplanted the collodion wet-plate process. Collagen, which is found in the connective tissue of animals such as pigs and cattle, is used to produced gelatine. This organic material, indispen- sable for analogue photography and cinema, is a reference to the origins of the medium in the 1830s.

In the video work «Resurrections», Navratil arranges found photographs and film footage from material originating from several German archives, including the German Federal Archives. The juxtaposition, superimposition and transition of the images is both reduced and intensified by the stark black and white colour profile. Machine parts, piles of animal bones ready for gelatine production, and laboratory assistants in white coats recall other familiar im- ages: the atrocities committed by the Nazis. Contained in this narrative, and in its inscription into the material history of photography, is another hidden layer. AGFA was a part of IG Farben AG, founded in 1925, the largest chemical company in the world at the time. The connections implied and illustrated by Alexandra Navratil develop freely from the origins of organic chemistry to the use of organic material to make highly artificial products, and form a link between the photographic industry and the chemical industry.

Dr Fred Walkow was an employee at the Filmfabrik Wolfen, who obsessively photographed the artificial lake near his workplace. Silbersee (Silver Lake), into which the contaminated water from film production was disposed, be- came the main protagonist in the eponymous video work from 2015. Silbersee was originally a residual pit left behind by coal mining. While silver compounds weren’t actually disposed of in the lake – it was too valuable for this – the sulphurous slurry produced by synthetic fibre manufacture was. Until German reunification, Silbersee was consid- ered the most polluted place in Germany, and former factory workers, as well as local residents, had long suffered from health problems. Dr Walkow entrusted his personal archive to Alexandra Navratil, and from it she developed this work.

The landscape imagery that dominates «Silbersee» often features a similar starting point, a recurring perspective that the photographer assumed. Navratil adopts a slow-paced narrative tempo and furnishes the merging sequences with text fragments that portray the experiences of a subject unknown to us: it remains unclear whether this subject is a person, the depicted surroundings or the lake itself.

The video work «The Night Side» is an unusual portrait of the factory employees who worked long shifts in almost complete darkness to produce light-sensitive material. These workers routines were defined by the absence of visual perception, their orientation dependent on the internalisation of haptic reference points, repetition and aural sig- nals.

In «The Night Side» we accompany Gundula Brett, an employee who worked at AGFA for over 25 years: Her body becomes a physical memory recalling the repetitive movements she performed many hundred times. «My life was a darkroom, and in the future, when I’m no longer alive, it will be dark again.»

Rachel de Joode (*1979, Netherlands) lives and works in Berlin. She studied time-based arts at the Gerrit Rietveld Academie in Amsterdam. She was awarded the Deutsche Börse Residency at the Frankfurter Kun-stverein, the Sculpture Space residency and the LMCC residency in Governors Island, New York. In 2017 she received a lecture- ship at the ECAL in Lausanne.

With her work, Rachel de Joode (*1979, lives and works in Berlin) questions the notion of space – specifically the ex- hibition space – and examines it in terms of its aesthetic, which is a defining factor of contemporary art and its circulation online. Her investigations occupy the corresponding space between three-dimensional artwork and its two-dimensional counterpart.

The digital wasn’t and isn’t immaterial, as Felix Stalder explains in his book «Kultur der Digitalität» (The Culture of Digitality), published this year. The fleeting impulses of digital communication are based on material global infra- structures; they extend from mines deep under the earth’s surface, where rare-earth metals are extracted, into space, where satellites orbit the earth. As these connections are often inconspicuous in our everyday experiences, they are often ignored – but this doesn’t mean they disappear or become less significant. Digitality historically refers to new possibilities in the organisation and interconnection of different human and non-human actors. This is where Rachel de Joode’s approach overlaps with Stalder’s analysis: the term digitality isn’t limited to digital media, but also appears as a relational model within analogue contexts, and alters the realm of possibility of many materials and actors.

All works presented in the exhibition are new and bear witness to Rachel de Joode’s recently discovered fascination for set design and puppet theatre. She is interested in the feeling of seeming small – like an ant – and this serves as a further departure point for her artistic investigations. A tiny ant upon the gigantic planet earth, the latter in turn moving through an apparently infinite universe. Her examination of proportion also attests to this anecdotal effec- tuation: Her «Stacked Sculptures» works fill the large exhibition room with their presence and cause us to reflect on our own, comparatively smaller, physical structure. The artist subtly plays with the fact that our perception is condi- tioned by the technology that surrounds us: we look, think and move around the objects, and even when her works aren’t directly related to technological questions, they still refer to the contemporary visual culture of digitality. She manipulates materials such as clay, paint and resin with her hands, and records these «conversations» photograph- ically.

She selects certain elements from these photographs, and in a further step she layers the analogue print images on top of each other as individual components in Photoshop. These two-dimensional sculptures are arranged as a group, and demonstrate de Joode’s interest in navigating the space between the corporeality of an image and the im- age itself. Although abstract, the individual forms seem tangible, and bring to mind a question that the artist asks herself during the creative process: What is it like to be a thing?

The triptych in the back room comprises three small studio performances that seem made for a play. The artist be- comes an exhibitor; her hands manipulate and display ceramic objects, create dabs of paint and place a miniature work on a pedestal. The model space becomes the pictorial medium, the boundary between the haptic quality of the objects themselves and their flattened photographic reproductions is blurred. The presented ceramic objects are testimonies to processes in the studio; fleeting gestures retained in clay, fired and glazed.

Rachel de Joode’s use of material oscillates between classic sculpture and applications rooted in today’s digitally in- fluenced aesthetic. While her earlier work can be assigned to the classic genre of still life, today they are hybrids – photographic sculptures or sculptural photographs. Asked about her interest in photography as a medium, de Joode outlines its functionality; how the language of photography simplifies and flattens, and how it – generally under- stood – supposedly represents reality. She refers to Roland Barthes: authentication of past realities wasn’t provided by other pictorial media; they imitated, while photography bore testimony. Consequently, this «This-is-how-it-was» was temporarily postulated as its essence, its noema. In this respect, photography functions like the extended ges- ture of a small child pointing at something and saying, «That thing there, exactly that, that’s one.» Rachel de Joode’s examination of the medium goes further: by duplicating the layers of the image, she subverts the apparent repre- sentative function of photography and blurs the boundaries between digital depiction, object and work of art in the exhibition space. 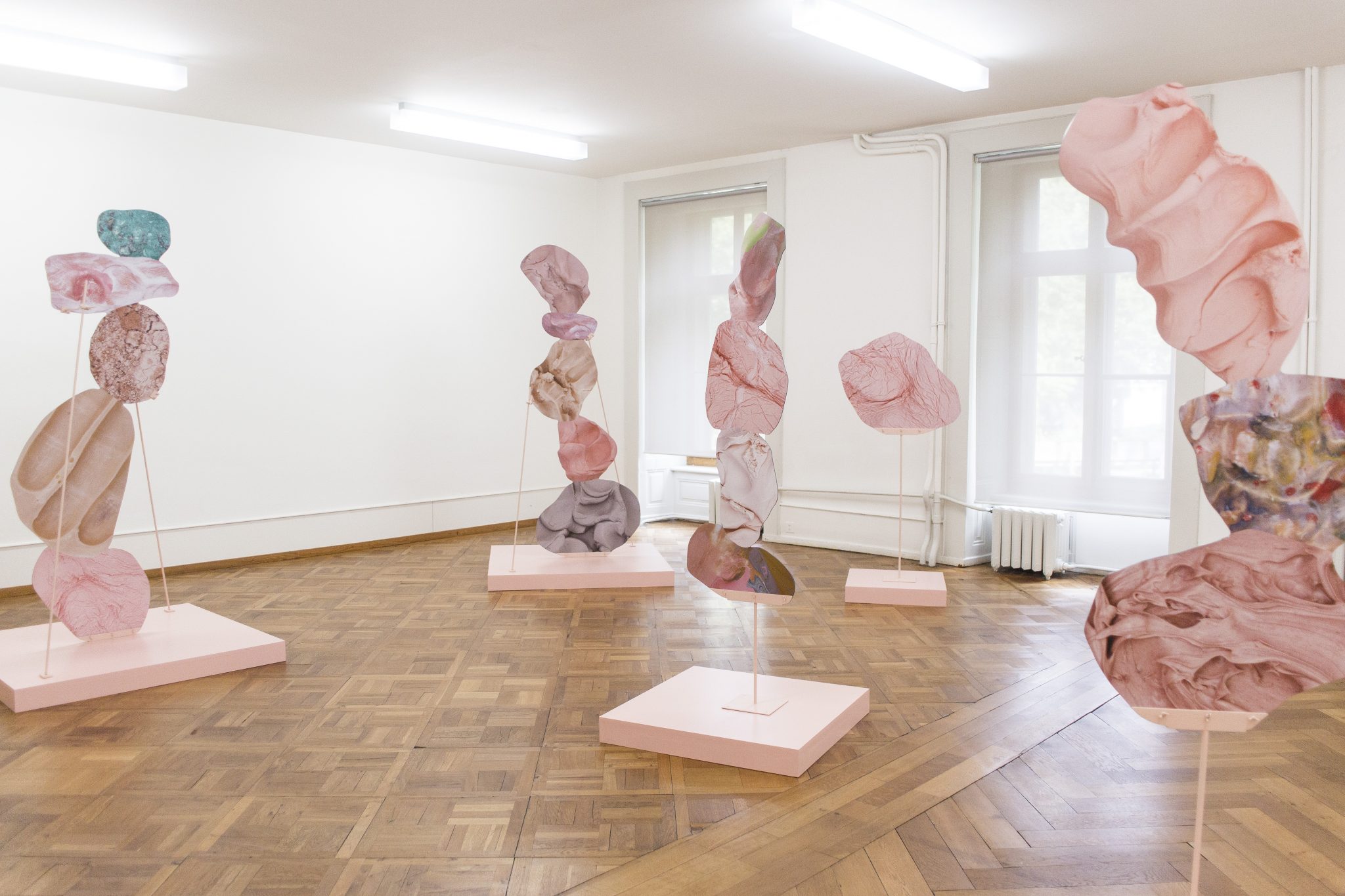 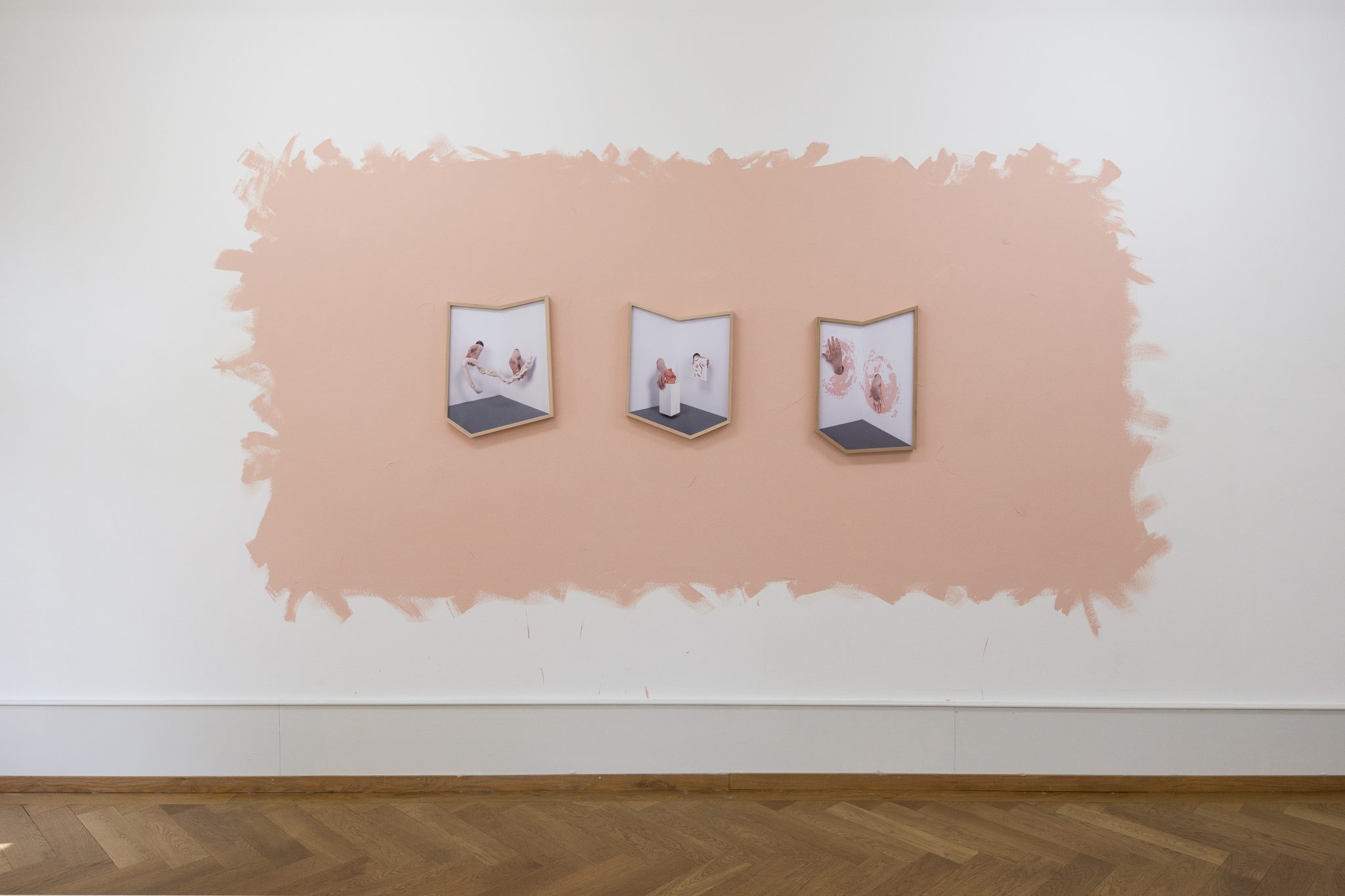 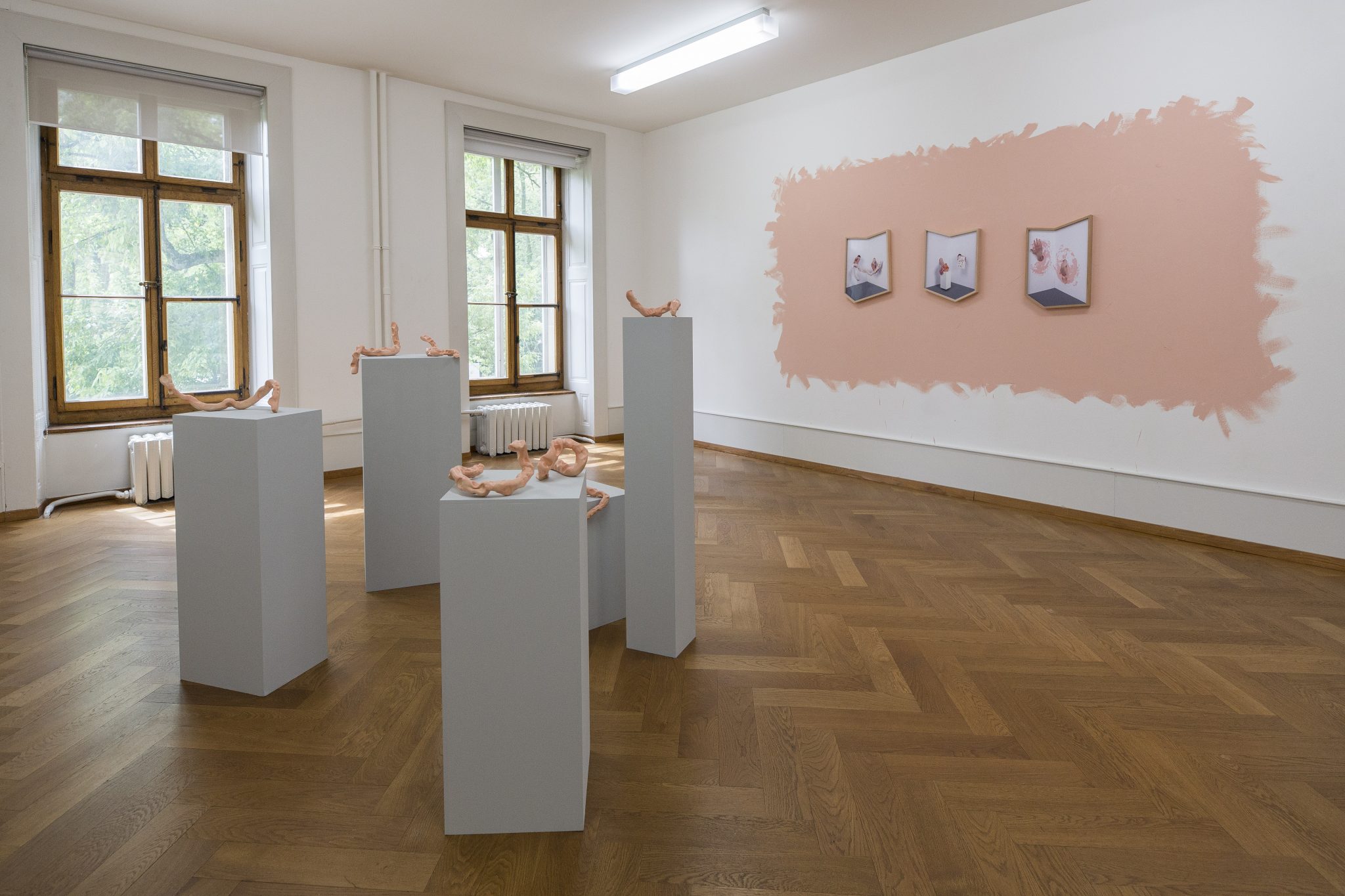 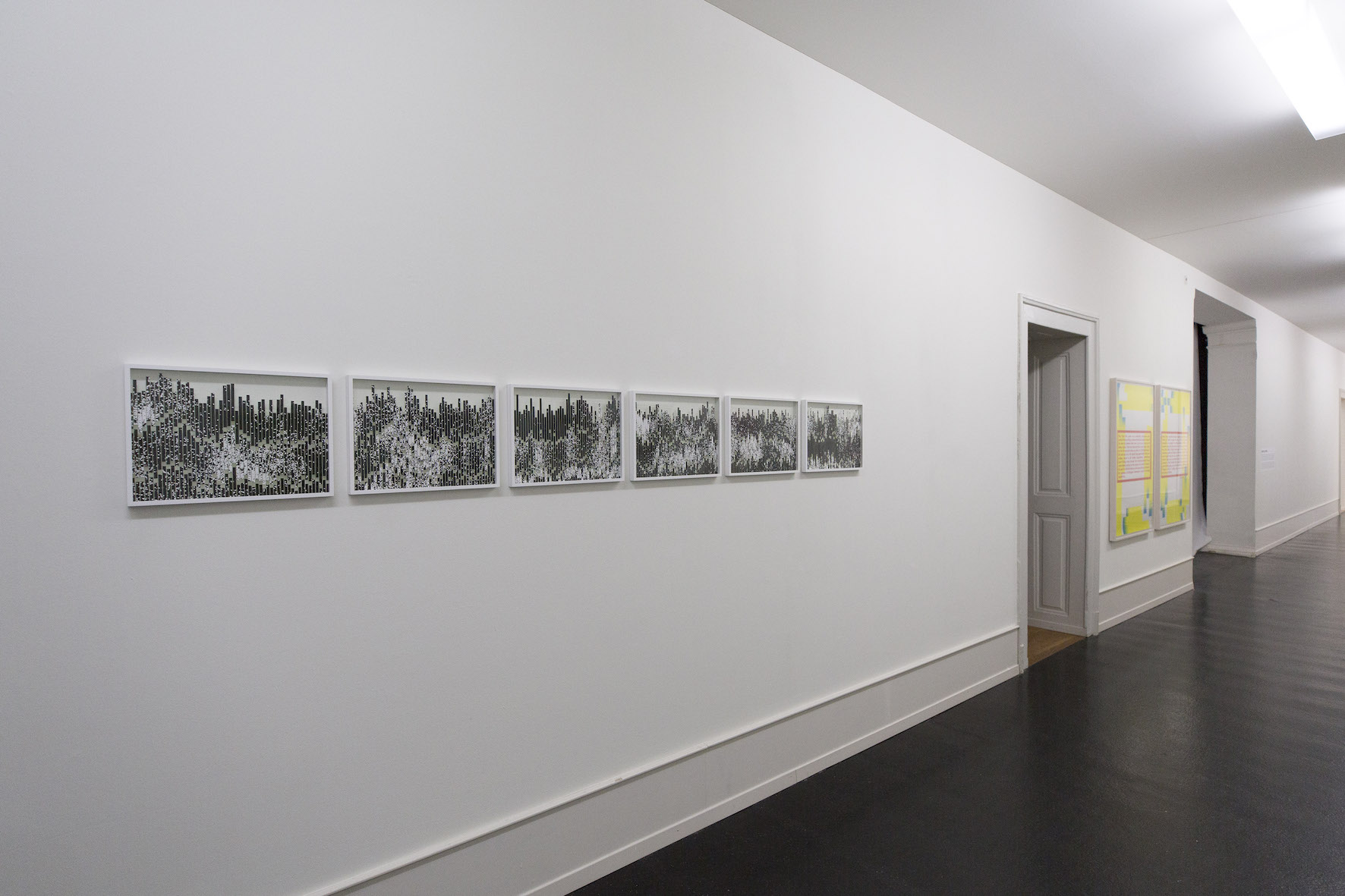 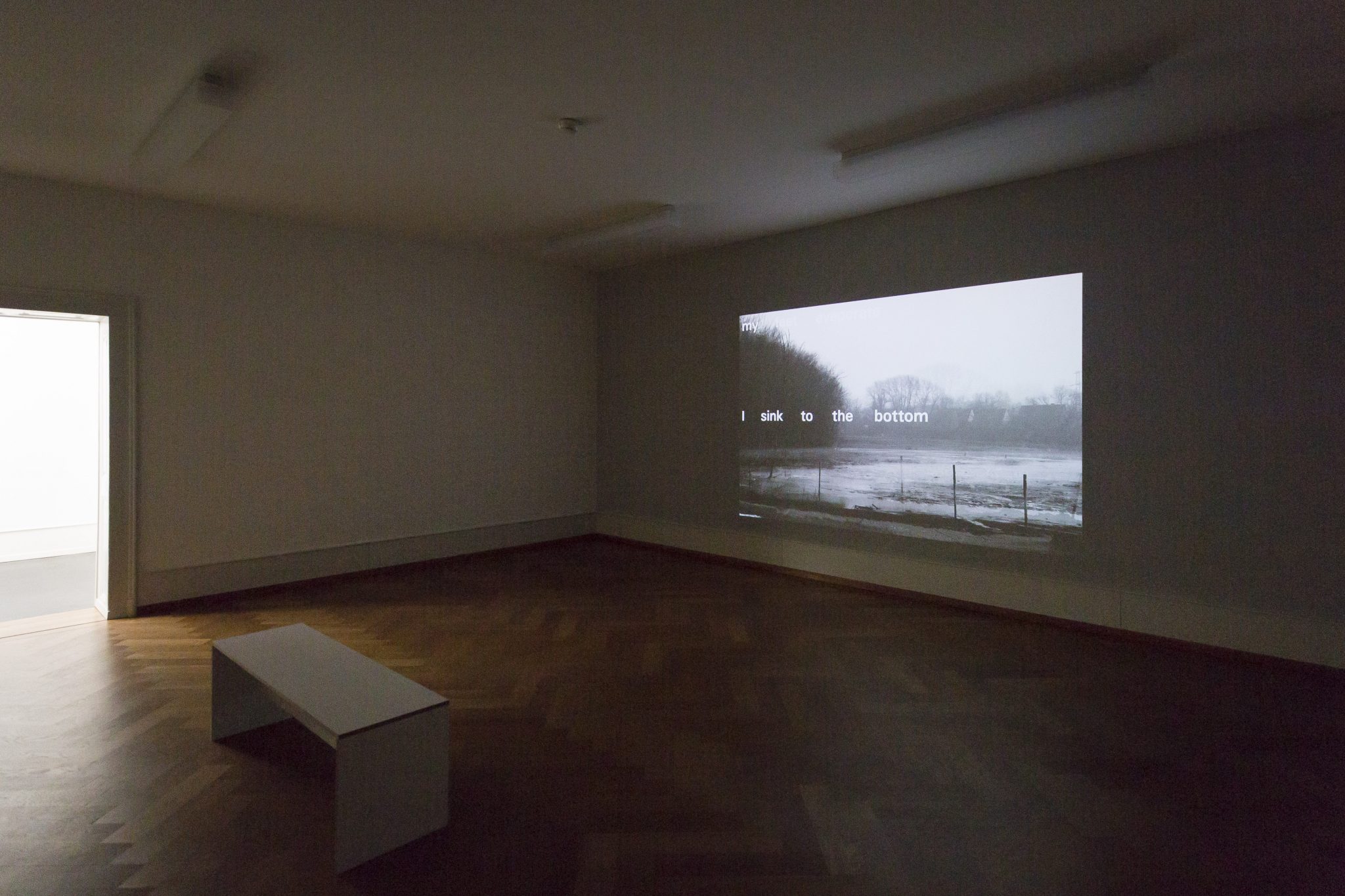 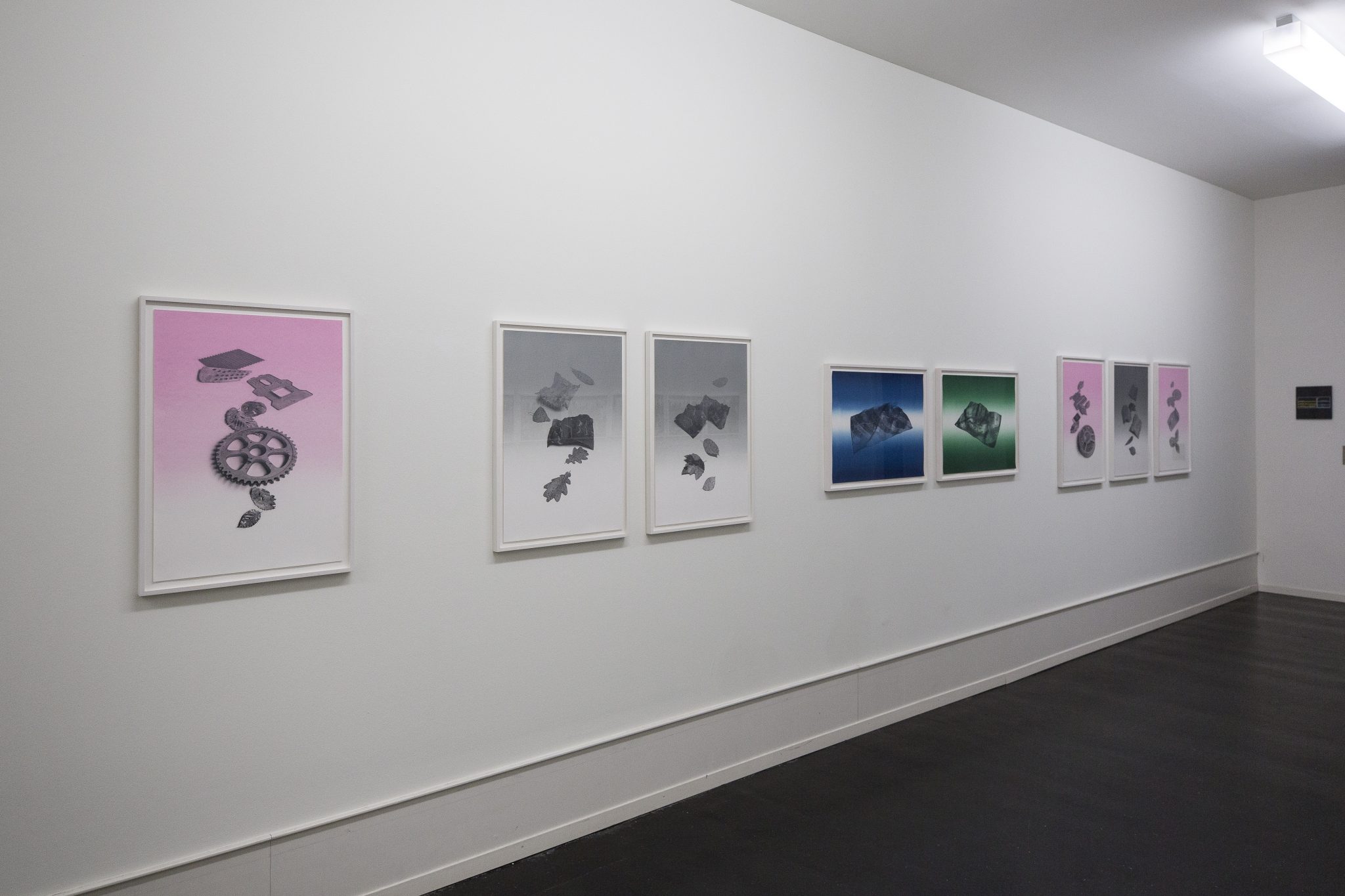